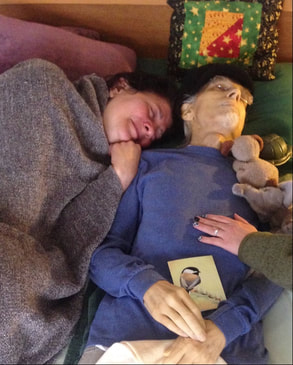 Bill’s friends came together in a ceremony of farewell before his death and a candlelight walk the night after.

When Bill was facing what were likely his final weeks with terminal cancer, there were many people who wanted to see him, to convey something of his impact on their lives, to say goodbye. But his stamina was extremely limited, and his focus was already turning inward, as his body was starting to shut down.

Before entering a clinical trial, some of his longtime students and colleagues in California had held a ceremony to mark to mark the end of his teaching and psychotherapy practice. It celebrated the mutual love and respect Bill inspired, and featured a memorable tango.

Now, with his local community wanting a way to hold him, a Gathering of Gratitude was organized in a neighborhood venue. The call went out “for members of Bill's community to come together to be present for the love and gratitude that is gracing this time in his life. With your help, there will be simple, lovely food, short-and-sweet expressions of gratitude, maybe some music, and definitely poetry.”

Because Bill knew it would be physically and emotionally difficult to listen to long tributes, participants were asked in advance to distill one to three words of tribute and blessing. These words were printed out on card stock and passed around the room to be read, forming a simple and gentle chorus of voices. Later they were strung together: the words of blessing hung in the bedroom in which Bill lived his last days and died; the words of tribute in the dining room as a more public declaration of the esteem in which he was held.

After he died and Bill’s partner and daughter had bathed and dressed him, a few close friends and family members spent time with his body before the crematory came to pick him up. Those present formed a small processional, scattering petals from his rose bushes on the path from bed to transport van.

Later, another call went out. Instead of adding the logistics of hosting people in the home to his family’s load, his community was invited to gather before sunset on his front porch. There, candles were distributed and folks walked in twos and threes to the nearby park Bill loved, to gather in a circle by a tree.

Later, when Bill’s closest people witnessed his cremation, they tucked him in with the cards containing the words of tribute and blessing from his community.
Bill's story is told by Holly Pruett.