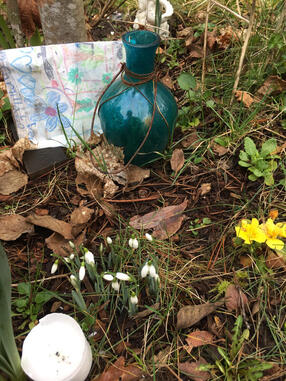 Justin and Lina’s midwives and community carried them through the home burial of their newborn daughter, Vera Luna.

​This was our second baby and my belly was growing beautifully. The midwives were happy with my fundal height measurements, the baby’s heartbeat, her movements, and my gradual weight gain. My contractions began on Mother’s Day just about exactly at the 40-week mark. Mildness oozed into the day, the skies were kind. My mother was cooking, our two-and-a-half year-old, happily skipping through the house. We went for one more walk to the playground and duck pond, and on the return trip I found myself pausing more frequently, taking deep breaths, guided by the wisdom of all the women before me, who, despite all the odds, had succeeded in birthing their babies.

My labor was long and difficult at times, but we had good support. Justin’s hands were at my back, chants rising upwards, escaping my lips. Sometime in the depth of the night she started to crown. I began to push and yell. When she was finally born, silence engulfed us.

I had known, I had known all along, somehow. Vera Luna was born with anencephaly. Her neural tube had not closed off properly during the first month in pregnancy. Her brain had been exposed to the small ocean of amniotic fluid she was surrounded by. She had no skull. She was beautiful, and very peaceful, and quiet. She never nursed or cried or opened her eyes and she stayed in our arms the entire 16 hours of her full life.

We were hit with grief and disorientation and more love than our hearts allowed. From there on, her life, death, and burial flowed, guided by something larger with the tremendous help from our midwives, friends and community.

Vera never left us. She is buried in our front yard, in a small wooden casket Justin built from old cedar boards, a dogwood growing above her.

Because we knew that babies cannot survive with anencephaly there was no rush, nowhere to go, no alarm to engage. Our wise midwives, having spent years close to life, and thus close to death, held the knowledge we needed at this time. When Vera died, a kind and gentle Medical Examiner arrived to confirm her death. There was a short moment of confusion, which later turned into a funny and beloved story, when the local police decided they should investigate the death and our midwives had to run from the house and stash their cellphones in the bushes for fear armed officers would barge into our sanctuary.

Vera spent the first night in our picnic basket, wrapped in blankets and sitting on ice. We were able to borrow a mini fridge from a friend, where she laid the second night, surrounded by an altar of cards, flowers and beads. Our first born, figuring out this older sister thing, brought her gifts, opened the fridge to look for her, to visit, to stay a while. Our friends dug her grave from the moist spring ground. I watched them from my window. The midwives procured the metal tag which had to be attached to the coffin before burial and which will mark her grave long after her bones disappear.

On the third day we buried her. She was wrapped in beautiful blankets, her face meeting the sun for the first time. We paraded her through the garden. Held in Justin’s arms, we introduced her to the chickens, the fish, serenaded past roses and weeds, slowly making our way to her grave. We placed her there on a bed of rose petals, with gifts from friends in her small casket, prayers and songs, with her two-and-a-half year-old sister rolling through the grass. When Vera was finally covered by the earth, I found myself on my knees, my hands clawing at the dirt, wanting to dig her back up to wrap her in my arms.

Her grave has seen many seasons now, the dogwood grown. It remains a gathering spot for us, a place for grief and praise, where we lay gifts often for all that sustains life. Practicing wonder and mystery, and how not to forget; how to remember, even.
Vera’s story is told by her mother, Lina Soares.