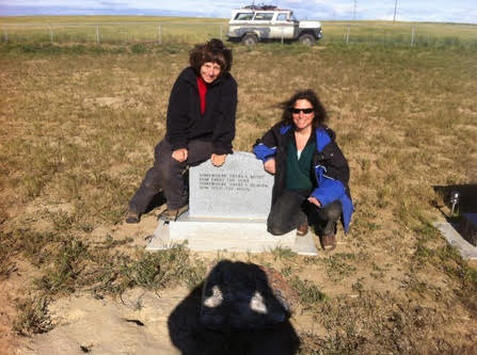 Mark’s family bucked pioneer cemetery rules to bury him in a sheet for a shroud with a ‘62 Suburban for a hearse.

Mark died in his sleep five months shy of turning 50. His death was unexpected, but his health hadn't been good. Mark had often told his beloved wife Phyllis, “If I die, pack me on ice and take me to our family’s pioneer cemetery.” As Phyllis says, “It turns out it's more complicated than that.” But with the help of friends, she made it happen.

Mark had been something of a child prodigy bluegrass banjo player; he was on a first name basis with the greats like Bill Monroe. Mark's talent was matched by a formidable mind. Their son Guthrie was born in Boise in 1991 while Mark was getting his Master’s in Geophysics. As Phyllis recalled in his death announcement:

“Mark was fascinated with science— he studied physics, math, chemistry, geology, geophysics, hydrogeology—and was always sharing his insights with us. He was also a serious fisherman and fearless whitewater rafter. He was an incredible father, playing chess with Guthrie instead of Candyland, and taking him rock hounding, fishing and rafting at an early age. And of course, Mark was a creative banjo and guitar player who thought about music constantly. As I write this I’m listening to Guthrie play Ruby My Dear on the piano, and I know that this love and curiosity lives on in his son.”

When Phyllis awoke that dreadful morning to find that Mark had taken his last breath in the night, there was one thing she knew for sure. She wasn't going to let the funeral home rush him away. He laid on their bed most of the day – “a little weird” Phyllis knows some might think, but “believe it or not, I found helpful, even as I look back.”

Friends located a nearby funeral home willing to do the bare minimum for the family. They handled the paperwork, suggested methods of cooling the body at home, moved Mark into their refrigeration unit when she was ready, provided a simple wooden tray for Mark's body to lie on in transit, and even suggested that they shroud him in a sheet signed by all his friends.

Unfortunately, the county medical examiner in their semi-rural town was less helpful. He started out insistent on an autopsy, which Phyllis objected to: “I didn't want him all cut up. Luckily after a while he gave up on that.” He objected to Phyllis keeping the body at home over the weekend. “He said I had to get him out that day, and even after he left, he kept calling to see if we had done that.” Without Phyllis’ permission, he called a clergy man – “A nice man,” Phyllis says, “but I'm not religious, so I sent him away. He said he would be on the front lawn if I needed him; I'm not sure when he left.” The medical examiner also called a funeral home, one which “wasn’t great to talk to either” and which later accused the supportive funeral home she’d selected of taking their business.

In the meantime, Mark’s family was making arrangements with the sexton of the pioneer cemetery that bears their family name, in a sparsely populated Eastern Oregon town. Despite the fact that the original occupants of the cemetery were buried unembalmed, without a concrete burial vault, the concept of a green burial was by now against cemetery policy. Phyllis didn’t know this at the time; the family had always thought it was “their” cemetery and hadn’t known there were by-laws governing burials.

Four days after Mark's death, Phyllis and friends loaded him into “Pete,” a 1962 Chevy Suburban that had taken them on many a camping excursion over the prior 28 years. It was, Phyllis says, “a perfect hearse for Mark's last ride.” Many carloads of friends and family joined the procession down the Gorge and through Eastern Oregon, attracting admiring attention from on-lookers along the way. They gathered around Mark at the cemetery, on top of a hill overlooking wheat fields and “shredded tunes as Mark was lowered into a six-foot hole,” as Phyllis told folks who were unable to attend. “Friends and family placed thunder eggs and obsidian and other mementos. My brother-in-law, Vern, sang Brokedown Palace with Peter on banjo as friends filled the hole. Towards the end we were able to laugh and tell each other Mark stories.”

Since his burial, Phyllis has visited Mark's gravesite a number of times. She and friends spent the night in the cemetery with Mark on their way to a bluegrass festival in Idaho. They drove there in “Re-Pete,” the replacement for the original Suburban, crushed in a windstorm just months after Mark's death.
​
And the cemetery by-laws? When the first carload arrived for Mark’s burial, the sexton and some people from the pioneer cemetery board were there to see what this group was up to. Mark wasn't supposed to be in a shroud and not embalmed, it turned out, but they were friendly about it, doing nothing to impeded Mark’s natural burial and bluegrass funeral. They said they planned to revisit the bylaws.
Adapted with permission from Holly Pruett Celebrant, Somewhere There's Music How Faint the Tune.