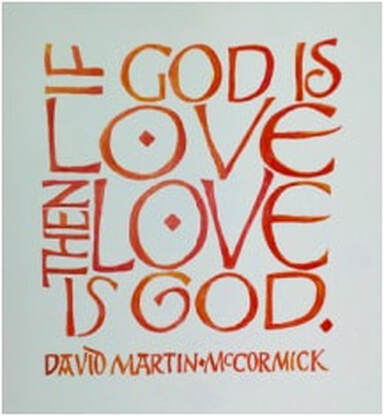 David died far from home but was honored with a home funeral in an Airbnb and a place of remembrance in his widow’s new house. See a video of David's ceremony

Go visit Lynda at her home on the slopes of Portland’s Mount Tabor and you’ll be greeted by the words and essence of her beloved husband David. In a nook of her front stoop hangs a gorgeously calligraphed plaque that reads, “If God is Love Then Love is God”.

David died 3,000 miles from their home in Washington, DC, in a Portland Airbnb, a lovely garden apartment near where he’d come for treatment of the cancer he’d lived with for a number of years. They had family in Portland, including Lynda and David’s first grandchild.

Lynda wanted to keep David’s body at home for 24 hours after his death. Their story is told in the 5-minute mini-documentary DIY Death. As practicing Buddhists, Lynda says, “In our belief system there’s this feeling that it takes a while for the spirit, the energy, to leave the body. And it’s better to leave the body in place and allow that process to happen naturally.”

After the hospice nurse helped Lynda bathe David’s body, he was transferred to a massage table draped with a beautiful piece of fabric Lynda had brought from home, not knowing why. The family filled the space with overflowing vases of flowers and photographs of their years together. David’s daughter nursed his grandson as family gathered for chanting, songs offered by members of the Threshold Choir, and stories.

Lynda contrasts the setting they created with what it feels like to be in a funeral home chapel: “It’s kind of like being in a hotel. It’s very inoffensive, there’s nothing of character that stands out. It’s meant to be able to hold anybody.”

A few months after David was cremated and Lynda had bought a house in Portland, she contacted a professional calligrapher who had met David. “The idea of creating a piece of calligraphy with this saying came to me as a visual image,” Lynda says. “I think the quote is David's own epiphany. It is very much his spirit: logical (if A=B, then B=A), but also soaring, spiritual, and simple. He often went right to the heart of a matter.”

More than art, more than memory, the piece has another purpose. Lynda explains: “The most important part for me is for other people to see the calligraphy. I wanted it to declare for me that David lived; that I loved him; and that he is in this house and always remembered. I have David's ashes in the house, but no one can tell what they are. They just see a lovely hand-thrown jar. Now there is a public spot for David here, where I live. I have made a place for David, and told the world - the world that comes to my front door - something important about him. This gives me great ease. I feel more congruent. I used to feel that there was a rupture; life without David had been torn from life with David. Now it's all one piece, I am all one piece.  When grief flows, I don't feel lonely.”

The calligraphed plaque was placed in a simple family ceremony just before the first Christmas after his death. “David’s sister and her partner brought little statuettes of a skier and a bicycle, both very much part of David's identity. Our daughter and son-in-law added a sprig of flowering rosemary. Our son put up the mounts for the plaque. There is a pine cone placed below for each member of the family. The installation is truly comforting.”

Lynda also honored her mother, who died seven weeks before David by planting a cherry tree in the front yard dedicated to her. “I just want people here around me, my friends and neighbors, to know who I came from, and to know something about these two people I loved who are gone.”
Adapted with permission from Holly Pruett Celebrant, If God Is Love. View glimpses of David’s home funeral in the five-minute video DIY Death.