how to Complete paperwork

Families wishing to handle the paperwork after a death without hiring a funeral director must obtain a blank paper copy of the Death Certificate and 24 Hour Death Notice, fill them out, obtain the signature of the medical authority certifying the death, and file them within a designated timespan. Knowing the process in advance of a death, and having the paperwork on hand or prepared, is very helpful. Here are the steps to follow:

24 Hour Death Notice [Report of Death]
A report of death, called a 24 Hour Death Notice, must be filed with the local county registrar or clerk within 24 hours. This provides the county with information about who has control of the body and states that a death certificate will follow shortly. Many county clerks may have no experience with a family filing their own paperwork. It can be helpful, in the case of an anticipated death, to visit their office to inform them of your intent. (See For Professionals for information you can bring with you.)

Metal ID Tag
A metal ID tag must accompany the body throughout. It is provided as part of the “Home Burial Packet” from the state health division, or can be obtained from a funeral director if hiring one to file the death certificate.

Burial/Transit Permit
The death certificate functions as the burial/transit permit once signed by the medical certifier.  The person acting as the funeral service practitioner must fill in the parts under Disposition on the first page of the death certificate. After obtaining the medical signature, give one of the attached carbons to the cemetery or crematory personnel as authorization for disposition. The other must be signed and returned to the issuing registrar within 10 days.

Cremation
Oregon does not require additional paperwork filing for cremations. Scattering of cremated remains is legal. Courtesy is requested when scattering other than on the family's land. 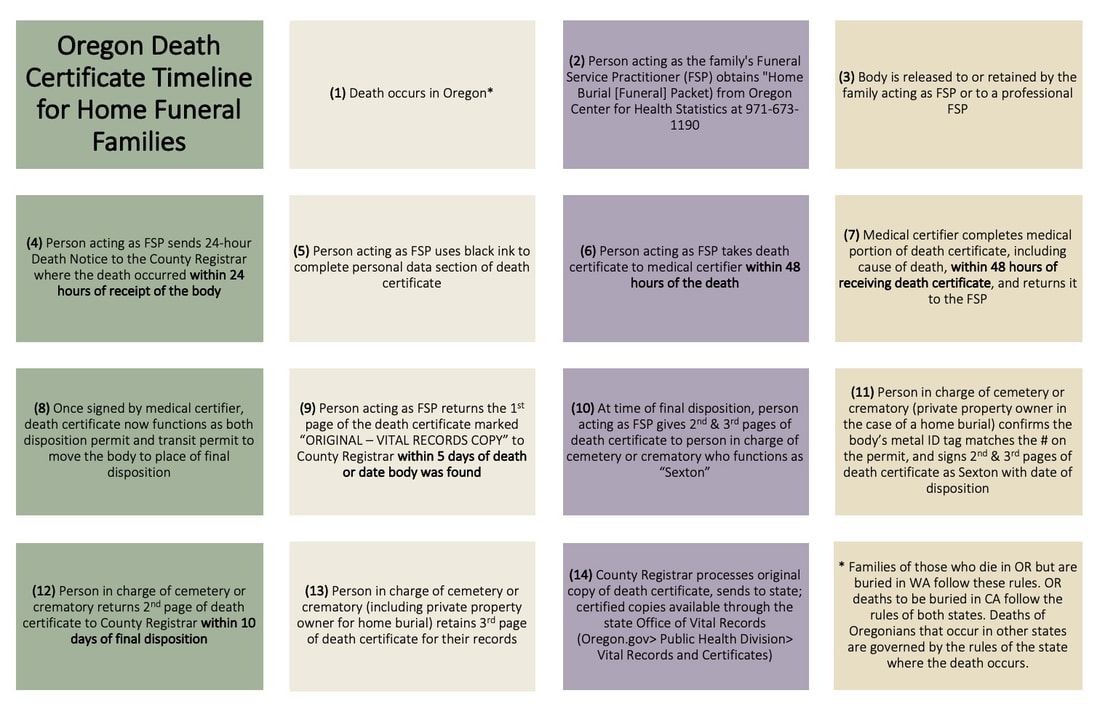 Immediate family members or a designated agent have the right to handle all aspects of after-death care. This means that families can legally care for and transport a body, keep it in their home for a viewing period, and arrange for final disposition themselves, without hiring a licensed funeral director, except for any details the family wishes to have done by a funeral home.

In the event that the decedent prefers that someone outside the family oversee funeral arrangements and complete the necessary paperwork, he or she may appoint a designated agent to make arrangements on their behalf. This is accomplished by signing an Oregon Disposition Instructions form prior to death. Limitations and responsibilities are described in that document.

Once you file the Death Certificate, the Health Department keeps the original. Certified copies may be needed to settle the affairs of the deceased (for example, for insurance or benefit claims, to close accounts). You can obtain certified copies, for a fee, either through Oregon.gov or through a funeral home, if working with one. For information about fees and how to order, go to Oregon.gov>GetVitalRecords. To order through Oregon.gov, see their PDF instruction sheet that includes the following:
​
“Death records that include the manner of death, cause of death or any of the medical information are known as 'long-form death records.' Short-form death records only include the fact of death or demographic information. Who is eligible to order long-form death records is outlined in a separate section of law (ORS 432.380(8)). Funeral home representatives listed on the death record may order both types of death records for two years from the date of death. After that, the family must order the record directly.”