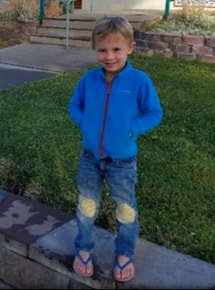 Max was buried on the ranch in the family cemetery, but authorities mistakenly thwarted the release of his body to his parents.

​This story starts with an article in Mother Earth News about home funerals. I read that article many years ago. I was not yet married and Max was not yet born. My parents were still in good health and I was young and didn’t know about death. This idea of another option, that we can care for our own dead was compelling but not yet applicable to my life. I thought, “I’ll look into this more when the time comes.”

My oldest son Max died in February 2018. He was 4 1/2, and wandered away from the house one afternoon while the babysitter and his little brother were inside. I learned of this when the babysitter called my husband, and said, “Max is in the pond!” We got in the cars and drove as fast as we could, when we arrived, the center of the pond had a hole in the ice with two paint spattered neoprene boots floating in it. Max was not visible.

Max’s body was found by a Sheriff’s deputy, and transported to St. Charles Medical Center in Bend, Oregon by Life Flight. Although the trauma team tried their hearts out, Max was declared dead later that evening. Blaine, my husband and I were left alone in the trauma room with Max’s body. I turned to Blaine and said, “I want to take him home, I want to bury him at the ranch. I want to take him home now.”

A little while later we were in the hospital consultation room. The State Police Officer had finished his interview and left, and we were joined by the Deputy Medical Examiner. She was explaining her role, and that the body could not be released until the State ME, District Attorney, Sheriff, State Police and herself all had a phone meeting the next morning to determine if an autopsy was required. At some point we were rejoined by the Chaplain bringing in sandwiches. After the Medical Examiner finished her explanation I said, “but after that I want to take him home.” And the Deputy Medical Examiner gently said, “I don’t think you can. The only cases I know of where it works like that are with the Warm Springs Reservation.” And the Chaplain went to get the photocopied list of funeral homes that the hospital gives out. It was then, after hours of holding it together, I really fell apart. I was so distraught that the carpet appeared to be moving.

We had several discussions of logistics, and whether or not to drive the two hours home that night. But in the end, I could not bear to leave Max alone in Bend. We checked into a hotel to wait for morning.  Sometime in the first awful night, between bouts of crying till I choked I turned to Blaine and said, “The thing is we are his parents, and he is dead.  The last thing we will ever get to do with Max is dress him and bury him.  There is no reason that someone else should get that privilege. There are so few things left that we can do with our son, and I am greedy, I want to do them all. I don’t want to share anything of the little that is left with someone else.”

In the morning, Blaine called a funeral home from the hospital list. He was able to make clear that nothing was to be done to Max’s body, and that we would return to Bend to dress him and put him in the coffin ourselves.  At that point it was our understanding that we could not have our son’s body back until we were ready to bury it.

Over the next couple of days my husband worked the phone diligently to clear the red tape so we could bring Max’s body home to be buried at the cemetery on our ranch. The funeral director could not find our cemetery list of Oregon Mortuary and Cemetery Board registered cemeteries. (It had been a decade plus since anyone had been buried there and I later found it listed on the Oregon State Parks Historic Cemetery list.) The funeral director told my husband that since it wasn’t registered, he would need to call the county planning department and get a permit for a home burial. When he called the county planning department, the clerk told him that the permit would be $200 and would need to go through the regular permitting process which can take months. The first day of phone calls resulted in nothing but dead ends, and unhelpful clerks and left my husband and I shocked and further undone in our grief.  We were close to giving up, when it occurred to use to call a local lawyer. The lawyer suggested that it was unexceptionable to bury our son in an established cemetery, so we called the funeral director back and informed him that we would be arriving the next day to purchase the casket and bring our son home.

The next morning, we drove to Bend in the black flatbed Dodge. I brought a suitcase of clothes, blankets and Max’s special things. We dressed him in his new yellow jammies, put on his watch and red stripey wool socks. I put a bunch of barrettes in his hair, since he liked to be fancy. And then, with the funeral director’s help, we laid him in the casket. We added some of his special photos, music CDs, and locks of Blaine, Eliot, and my hair.

The casket was a stroke of grace in this whole terrible thing. It was a western style one made here in Oregon, and the people who made it looked up our ranch and put our cattle brand on the leather work by Max’s name. It was nice that someone who didn’t know us at all had cared enough to figure that out.

The funeral director wheeled the casket around to their loading dock, and then we lifted it onto the back of the truck. He and his assistant seemed a little taken aback when we proceeded to wrap the box in moving blankets and strap it down with such practiced efficiency.

That afternoon we proceeded to the cemetery. Blaine put Max’s fishing rod, binoculars and twenty-two in the coffin before unloading it from the pickup. There was a straw path across the muddy wheat field, and the excavator parked in a corner of the cemetery. The four pall bearers carried Max’s casket into the cemetery and set in on the cross bars above the hole. We opened the lid and then I sat down on the ground and took Max’s hand. Blaine sat where he could touch his soft hair.

The ceremony included a eulogy by me, and memories from the small crowd attending. Both grandfathers spoke, and we had the minister who married us say the opening and closing prayers. Blaine read Max his favorite picture books aloud and then we sang I’ve Been Workin’ on the Railroad. People were given a chance to say goodbye, some gave Max a final kiss and some put a small token in the casket.  Then we covered his face and closed the lid. The cross bars were removed and the box was lowered with ropes by the pallbearers. We sang Amazing Grace as we took turns shoveling scoops of dirt back into the hole. The three little ones at the funeral finally lost interest in climbing on the excavator and all ran over to help shovel dirt. Max is buried at the foot of his grandmother and at home on the ranch he loved.

I’m glad that I had the presence of mind to insist that we dress Max ourselves. I’m glad that my husband was able to work through the red tape so we could bring Max home. I’m glad to have a family that supported our homemade ceremony. And sometimes I do want to beat myself up for not calling a lawyer instead of a funeral home that first terrible morning. But my son was dead and I had nothing left.

Max’s body spent 48 hours at a funeral home in Bend. The funeral director and his employees were incredibly kind and respectful (I don’t think you could have found better); but still, they were strangers. They didn’t know Max. They didn’t know how special he was; they couldn’t possibly understand what a wonderful boy he was. Most importantly, they didn’t love him.
Around the one-year anniversary of Max’s death, I had the privilege of meeting again with the Deputy Medical Examiner who served our family at the time of the death. We discussed my desire to take my son’s body home and her comment about not thinking that it was possible. When I showed her what is allowed under Oregon law, she confirmed that despite her professional expertise, she was not aware of this aspect of the law. I had the same conversation with the hospital chaplains who were unaware of our rights under the law. My dedication to the creation of this website is so that professionals like these, along with families like ours, have access to accurate and practical information.

Besides seeking changes in their professional education practices and institutional policies, I’ve asked these professionals to consider why the right to care for our own dead can be so important. For me, there are three primary reasons. First, we are a country founded on religious freedom; how we handle our dead is an important part of that freedom. Second, there is the cost associated with engaging the services of a licensed funeral director. For anyone, but especially a person with limited financial means, this is an additional burden on an already grieving family. Third, there is the matter of privilege born of love. There is no reason that a family should be required to surrender the privilege of housing and caring for a body that they love so deeply to strangers, even licensed strangers like a funeral director.

I am compelled to tell this story. It feels a bit like scattering dandelion seeds in the wind, but I hope with all my heart that this information about caring for your own dead will reach those who need to know it. I hope this spares some other family from the pain of leaving their loved one’s body in a place far from home to go home and care for living family members. I hope that you get the chance that I was denied, to lay with your dearly departed’s body in the privacy of your own home keening until your voice is gone. Spending those last hours with that body that you hugged and kissed, talked to and laughed with.  For all that the body is not the person, it is still an important and precious thing.

In loving memory of Max.
Max's story is told by his mother, Keelia Carver. In the two years following Max's death, Keelia worked with St. Charles hospital to win changes in their family information sheet and body release policy that align with Oregon families' legal rights to care for their dead.

Oregon Funeral Resources and Education is a non-commercial public interest site dedicated to helping Oregon consumers care for their own dead with or without the assistance of a funeral director. All rights reserved  © FuneralPartnership.org