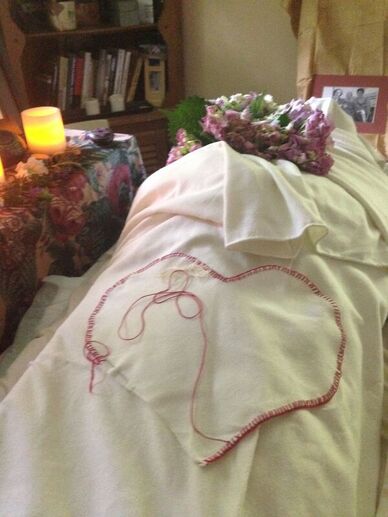 Marcy’s community organized her home funeral and green burial, with transportation and paperwork handled by a funeral home.

During the five years and three months Marcy lived with stage IV ovarian cancer, she devoted most of her still-considerable energies to staying alive: ferreting out and tracking clinical trials; flying to Philadelphia, the Bronx, Marin County, and San Jose for ferocious treatments that she endured without complaint; organizing support teams and other patients wherever she went; exercising to maintain her strength; biking to twice-weekly acupuncture and shiatsu to bolster her system; trying to solve the dilemma of what to eat when her gut was in rebellion; and blogging about it all.

Most of the rest of her energy went to enjoying her hand-built life: quilting and reading, visiting and laughing with friends, working on her memoirs, advising her colleagues at the Rural Organizing Project and in other social justice endeavors (even serving as a Chief Petitioner on a minimum wage ballot measure campaign), walking her dog Sawyer, hanging out with her beloved husband Mike, and - perhaps most of all - sitting in and looking out at the lush gardens they'd built together at the home in Portland that became their refuge when cancer had evicted them from their life on a pond in the country.

But every once in a while Marcy directed her thoughts and her words to what would happen on the inevitable occasion of her death. On the one-year anniversary of her diagnosis she wrote an email to her chosen sisterhood titled, “Some final wishes, dear friends – please save.” When she died, her sister and closest friends faithfully fulfilled her instructions.

In the wee hours after she exhaled her last in her bed at home they worked through the night to care for her body. They moved her into her craft room, a space festooned with the fabrics from her many quilting projects, the hand-painted rocks she’d made during her illness as gifts to remember her by, and mementoes from her years as an activist. By candlelight they washed her, talked to her, dressed her in the clothes she’d chosen, and tucked in all the items she'd wanted to have with her on her journey.

The next day, as her loved ones gathered to spend time with her body individually and in clusters of two and three, details of her burial were finalized. Marcy had visited historic nonprofit River View Cemetery, becoming popular for a natural burial, in her nightgown to select adjoining plots for herself and Mike, even as she hoped not to use them anytime soon. Of her gravesite, she’d written, “Visit often. Make it a place where you problem solve dilemmas, process new adventures, keen, and celebrate the many transitions in your own life. Come alone. Bring others. Young people, scared people, irreverent people. Keep me as present as you can. I truly believe that I will feel and treasure this. Maybe some of you will rest near me when the time is right.”

On the day of her burial, her personal honor guard hand-lowered her body into her new earthen home, by the edge of a wooded ravine on a sunny slope with a spectacular view of Mt. Hood. She was wrapped in a shroud sewn by her sister featuring an unfinished heart, resting on a board crafted by her brother of white pine from his farm in upstate New York. She was blanketed with flowers and leaf compost, words of love and an abundance of salty tears.

One of Marcy’s best friends, a home funeral guide, had obtained the “Home Burial Packet” from the state Health Division’s Center for Health Statistics on their behalf. But in the midst of hosting the visitation and preparing for the burial, her family decided to have the cemetery’s funeral home handle the paperwork. And with steep steps from their home and the exhaustion of her long illness, her husband decided to leave the transportation to them as well. On the day of her burial, the children in her life used streamers to make the generic transport van more festive.

Several months later, over 200 of Marcy's friends and colleagues came from around the state and across the country to mourn her in a five-hour gathering that included a slideshow of her home funeral and green burial, along with one of her full 56 years, no fewer than 13 eulogists, a sit-down meal, and a dance party.​
Adapted with permission from Holly Pruett Celebrant, A Secret Chord and Looking Death in the Eye.

​Read more stories...
Oregon Funeral Resources and Education is a non-commercial public interest site dedicated to helping Oregon consumers care for their own dead with or without the assistance of a funeral director. All rights reserved  © FuneralPartnership.org